The treasure of the Mayas

Professor Ramirez is under urgent suspicion of having stolen the famous mask of Moctezuma - a Mayan sanctuary.

Can he, the respected professor really be the thief and did he hide the mask in his office?

Dive into the world of the professor and discover his dark secrets!

Suitable for beginners and advanced.

Book now
The treasure of the Mayas

Professor Ramirez is a luminary in his field: as an expert on pre-Hispanic civilizations, no one can hold a candle to him. Even in his spare time, he searches for the ancient treasures, just like his role model Indiana Jones - and his success proves him right.

But since his last trip, the professor has changed. He seems more and more peculiar and locks himself in his office for hours. His assistant Ernesto, who has accompanied him on his travels for years, suspects that it has something to do with the last excavation: Namely, the most important relic of the last excavation has disappeared, the golden mask of Moctezuma. Ernesto suspects that the professor might have something to do with it.

Your mission is to search the professor's office, find the mask and thus protect the university from a scandal. 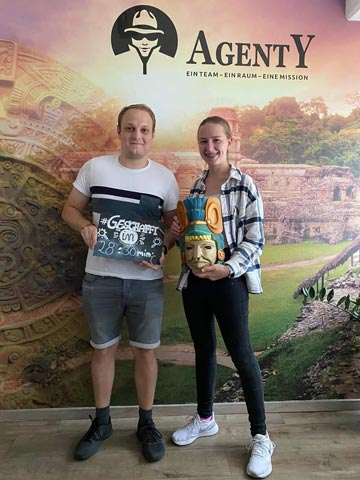 We have a new record! On 10/27/2021 the previous record (30:15 min) was broken: Six agents solved the case in 28 minutes and 30 seconds. Only two of them dared to go in front of the camera. And we ask: Can this still be topped? Can anyone break this record?

For your favorite people

Whether it's a birthday, wedding anniversary or graduation:

You can easily buy Agent Y vouchers online. We will also gladly send you printed vouchers by mail.